A strong private ADP National Employment Report for December indicates more good news from US employers, workers and the economy. The report, which does not include public sector data that is included in December’s non-farm payroll report from the Department of Labor, indicates 238,000 new jobs created in December. Additionally, the November report was revised from 215,000, as initially reported, to 229,000 new jobs.

This is more good news for the US economy whose 3rd quarter GDP data suggests growth of 4.1 percent. Coupled with encouraging trade balance data from Tuesday, the USD made significant headway against the euro, the yen and the weakening Canadian dollar. The USD has already gained 1.5 percent against the Loonie this week

Analysts expect the December non-farm payroll report to reflect an increase of 196,000 jobs but anything more than that will certainly ignite equity markets and the USD. Many experts believe the US unemployment rate will dip as low as 6 percent by years end. As the world’s largest consumer base, this is bound to boost global equities.

The USD was up 0.4 percent, passing the C$1.08 mark and setting a new 3-year high. The Loonie was soured by statements from the Bank of Canada’s Stephen Poloz who said the bank would hold the current interest rate until further notice. Canada’s rising trade deficit weighed in investors.

The MSCI world equity index, which reflects equity shares from 45 nations, edged ahead 0.1 percent to achieve its highest level in 5.5 years. 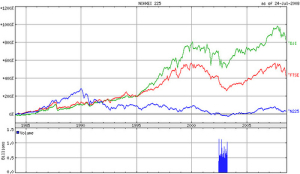 US equities did not warm to the data as investors waited to see the non-farm payroll report and hear from the Federal Reserve. There is speculation that Chairman Bernanke could increase the $10 billion tapering initiative if the non-farm payroll report is strong. Minutes from the Federal Reserve’s meeting are scheduled to be released on Wednesday afternoon. Investors are also concerned that the Fed might raise the existing interest rate.

Meanwhile, the European Central Bank (ECB) will meet on Thursday but with the success of recent sales in Ireland and Spain little change in policy is expected. The euro zone is still struggling with 12 percent unemployment.

The US economy is making progress. Barring interference from Congress, a stronger dollar and continued gains in US equities seem realistic.