As the final BCS Bowl between Florida State and Auburn takes center stage, it is interesting to note that many of the players will be playing professionally in the near future. This will be the last BCS Championship as college football prepares to enter a new age with the next year’s College Football Playoffs. This will not only declare a National Champion who won the title on the field through a series of elimination games but will also yield millions of dollars to the NCAA’s bountiful coffers. There is little doubt that the NCAA is in the business of making money through college sports and college athletes.

To make money in a competitive environment, a university or college needs the most talented, dedicated players, an experienced staff and a head coach that knows how to win. The stakes are high!

For the weekend of the final four in college basketball, CBS charged $700,000 for a 30-second advertising spot. The network’s take on the men’s and women’s final four games is about $6 billion every year. Athletic conferences receive millions of dollars as each team in the conference advances through the tournament. There is a lot of money on the table.

While all this revenue is being generated, college athletes are risking career-ending injuries, juggling classes and receiving no income. To many fans, this is shameful.

The Case For Paying Athletes

College athletes have begun to fight back. The case of former UCLA basketball player, Ed O’Bannon, could shake the NCAA at the roots. O’Bannon is suing because the NCAA used his image in video games and did not compensate him. He is suing for a share of the profits. 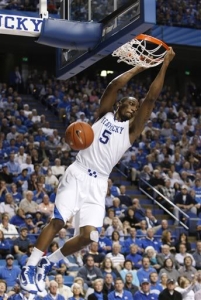 Then, there is the question of why college athletes cannot charge for autographs. The idea that these players are supposed to be students first and athletes second is simply untrue. The Kentucky basketball program is the perfect example. Each year the roster is filled with three or more athletes who are biding time to get into the NBA. The University knows they will not graduate and are recruiting them for the express purpose of filling seats and carrying the team to the NCAA tournament title. This is a far cry from the scholar athlete.

We live in a free market economy. If a high school athlete has value and a university wants to recruit that athlete, the school should offer a contract.

The contract would state the athlete’s responsibilities, the amount of time the athlete will be at the school and what condition the school and the athlete must meet to serve the respective parties best. Basically, the school would be offering the high school athlete a job for a certain amount of time. Part of the job offer could be free education, free room and board and other amenities but the athlete should be compensated for the demanding effort playing Division I sports requires.

Opponents to the free market approach will say it will ruin the sport. However, the players are risking their careers and are filling stadiums and courts in the process and universities are profiting from their performance. College coaches in major conferences have lucrative contracts, big coaching staffs, talk shows and book deals. They are professionals. Shouldn’t the players upon whom they rely to secure their job be treated the same way?

Whether you agree with the free market approach to college sports or not, most fans agree the system is broken. There is too much money in the college game and very little of it is going to the athletes.

The SEC is regarded as the strongest football conference in the land. Football players receive scholarships and if they graduate they have no college debt burden, unlike 60 percent of US college students. In theory, this sounds like a good arrangement except for the obvious weakness which is that many of these athletes do not graduate. Many also come up short when they turn professional.

The argument for education and a degree is solid but most players in the SEC, ACC, Big Ten and Pac 10 have different aspirations. They regard their college experience as being in the Minor Leagues, training for the Big Show. Shouldn’t they be paid accordingly?