Is Commercialisation Squeezing the Essence Out of Culture?

Home/Culture/Is Commercialisation Squeezing the Essence Out of Culture?
­

Is Commercialisation Squeezing the Essence Out of Culture?

The rate at which human society is developing is quite jaw dropping when you consider the recent technological bounds we have made. For thousands of years we had primitive technology, isolated cultures, and knew little about the areas beyond our own influence. Now it takes about three seconds for you to pull out an iPhone and poke a kid you don’t even know on Facebook from across the world.

It is crazy to think about the impact our developments has had on global unity. Just a few centuries ago many Europeans spent their free time wondering if the world was flat while Native Americans lived dramatically different lives across the Atlantic. New forms of technology and the birth of the Internet have united us in an incredible way.

Americanisation of Other Countries: Good or Bad?

America is one of the major hubs for this exponential growth. When compared to other countries in terms of age, it looks like an infant. When we compare other statistics like overall income and military strength however, it looks more like the baseball player who did steroids after their rookie year and became an all-star. The growth of America can be accredited to the wealth of successful corporations that have flourished under capitalistic ideas. They are fuelled by financial incentives and therefore have begun to expand into other countries for maximum profits. 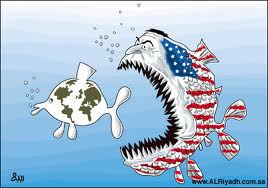 Thanks to the new global unity commercialisation is flourishing in foreign areas. Human kind is moving towards more of a melting pot culture. But plenty of people don’t see it that way. The melting pot theory states that all the cultures blend together to form one unique society. Instead it looks more like the commercialised nature of America is simply taking over and rendering other cultures obsolete. Lets take a look at a few cultures that have been impacted by Americanisation.

Keep in mind that this is a very broad demographic compared to the other examples. When Europeans began to settle in the Americas there was a lot of fighting over ownership of the different areas. There were so many different countries colonizing the areas that the culture spanning across South America and Mexico developed to be very diverse.

In a more modern setting these countries have struggled to deal with one major problem: NAFTA. The North American Free Trade Agreement came about in the Bill Clinton era and has since reeked havoc on Latin American countries. Essentially the agreement allows big companies like Chiquita and Walmart to operate freely in their countries for cheaper labor. While it is providing jobs for people, the money earned and spent at the corporations goes back to America and has driven many countries deep into economic despair.

Mexico for example used to have a successful system of ejido farms that made them unique. Now big farms and corporations have eliminated the majority of them and replaced them with a less sustainable system of agriculture. As factories fight over land ownership there has also been several groups of indigenous people who are no longer in touch with their original lifestyles.

For a long time Japan followed a strict isolation policy. They treasured the sanctity of their culture and didn’t want any other areas of the world intruding on the natural order of their land. Now that America has finally woven itself into the country things are rapidly changing for the once strictly Eastern culture. 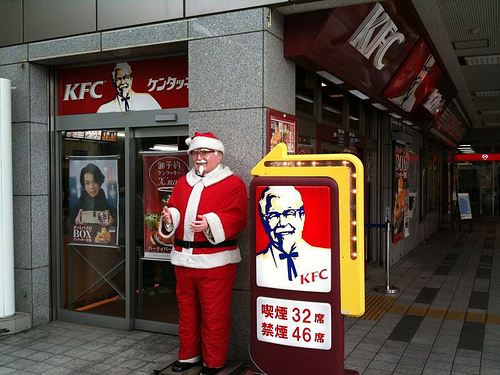 A little proof of our culture invading theirs is the craze known as KFC’s Kentucky for Christmas. It is estimated that only around 1% of Japan’s population is Christian. Because of this Christmas is a foreign idea to the majority of the people who live there. When KFC began to franchise abroad they came up with a campaign that promoted their food when Christmas came around. It has since evolved into a yearly Japanese trend and in some areas the lines for a bucket of chicken lasts longer than two hours.

Like we mentioned earlier, America is one of the youngest countries. If you consider America an infant amongst countries, think of India as one of the elders. The country has one of the oldest cultures, dating as far back as 3300 BC. It has become densely populated and in recent years commercialisation has run rampant.

Popular companies use India to outsource work and with each passing year more and more companies are popping up there. Just recently Amazon and Starbucks announced that they were going to expand in the country and take advantage of the large population.

Clearly commercialisation is having a monumental impact on the development of human culture. But is this a good or bad thing?

Well that question is a little difficult to answer. There are both positive and negative effects of commercialisation. Without the major financial benefits and global research the technology our society has grown to love wouldn’t exist. Would you prefer to live in a world with cheap tablets or an isolated one that focuses mainly on survival? It is thrilling to see how much our society is developing but at the same time disheartening to see the world we knew fading away.

Some countries used to have a unique culture that was unlike anywhere else in the world. For this reason they became a hotspot for tourists. People love to experience a world that is different from the one they have grown comfortable with. With global commercialisation the tourists are getting a much less thrilling experience. Authentic native cuisine establishments are being replaced by fast food joints and other familiar corporations. Some people view Americanisation as a virus that is killing off the authentic history of foreign areas.

In order for you to make changes, you have to be willing to let go of the past. Before doing this weigh out the consequences of the change and decide whether or not it is worth it to you. In the end it is really a matter of opinion. Yes, it is a fact that the world is becoming more commercialised, but we stand divided as to whether or not it is a good or bad thing.